How do I evaluate Kosatka campsite at Hracholusky dam

On the Internet you will find a lot of reviews on different websites. But all reviews have one thing in common. The guests evaluate the accommodation from their point of view, which is often not entirely objective. As one hundred people say, one hundred tastes. In addition, 20-30 reviews on 100-8 websites, where XNUMX% is available, are often available on dedicated websites. Common sense suggests that it is a fake. Given that I am the operator of the Kempy-chaty.cz portal already XNUMX years, I can provide an unbiased and objective view of the camps I have visited. Over the years, I have screened hundreds of Czech and Slovak camps, which has greatly contributed to the knowledge issues. I'll be in the first round to evaluate the Kosatka campsite, which lies directly at the Hracholuska reservoir.

Right after my arrival, I headed for the restaurant. To my disappointment they only had fried foods. So I put the croquettes with the cutlet. Unfortunately, later on, I found out that this campsite has more refreshments and smaller pubs all over the area, so everyone will find it. In one they focus on fried, elsewhere they give you regular meals. Next time I'll know ..

. However grapefruit birell and coffee were great .. 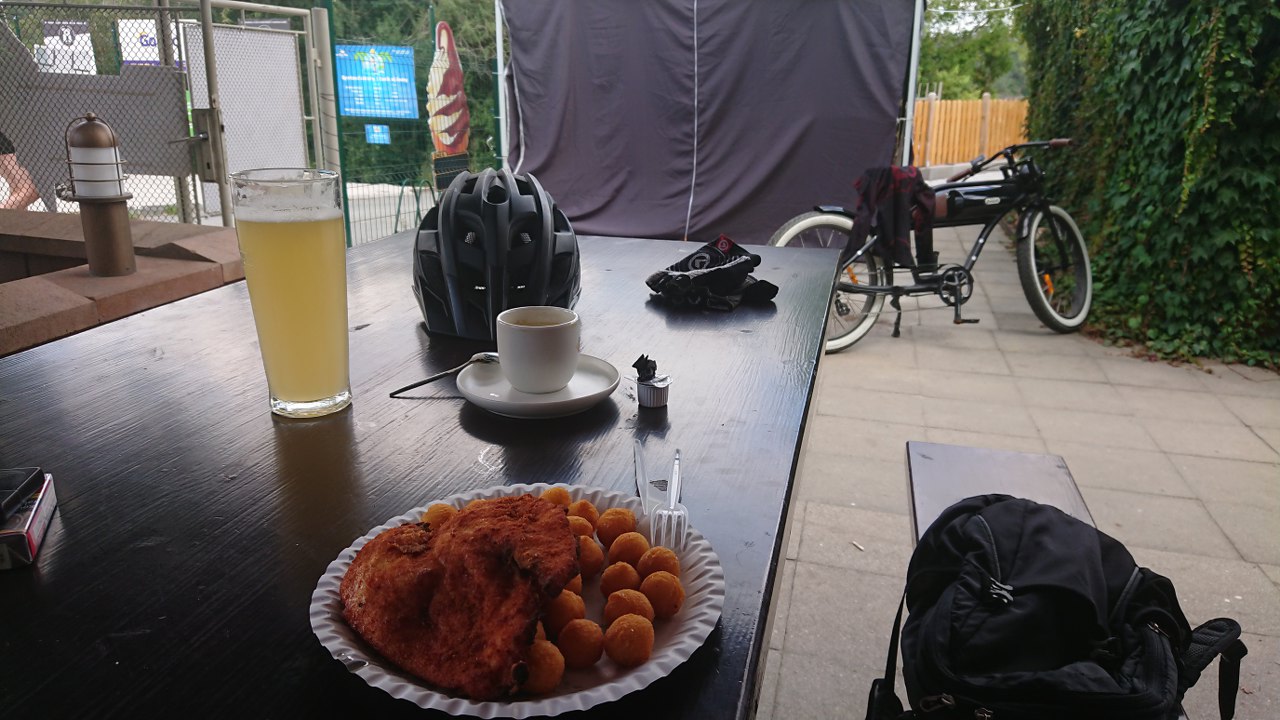 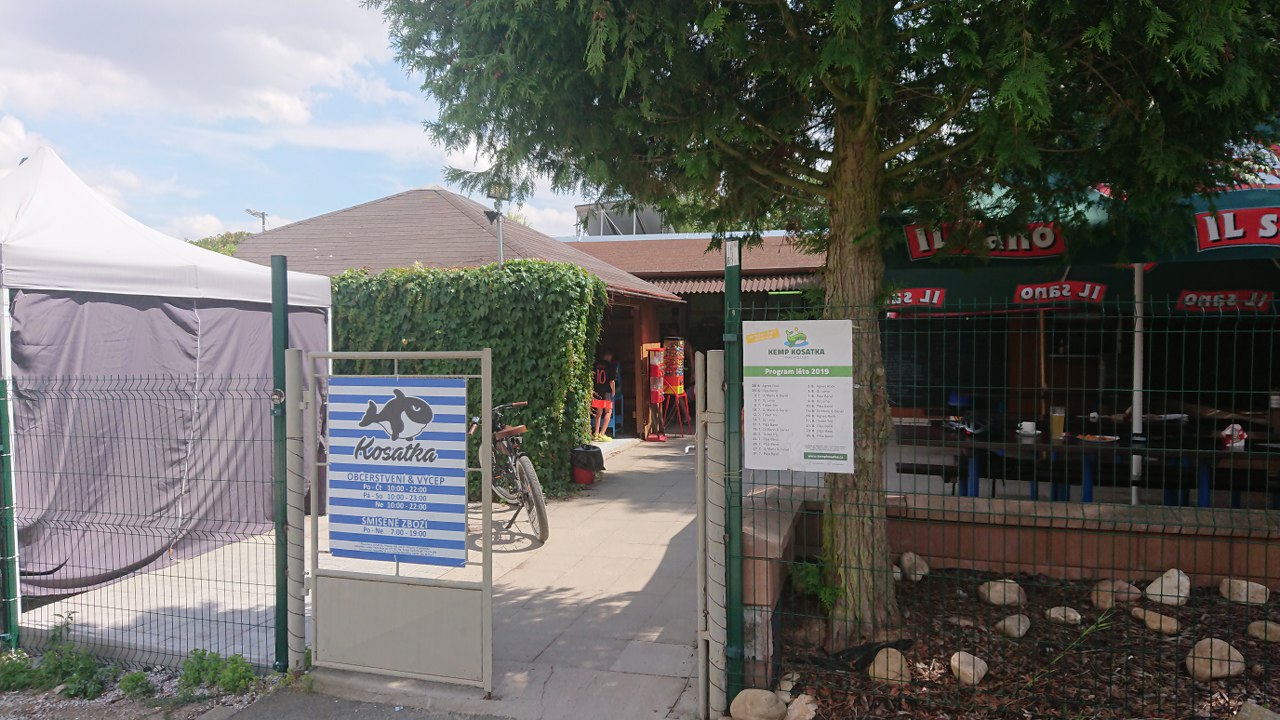 While waiting for food I was attracted by attractions for children and adults, which were located right in the main pub and were FREE for both the camp's guests and the passers-by who came to get something good !!!

That's just not seen. Many camps want you to pay for your entry into the area .. :)) 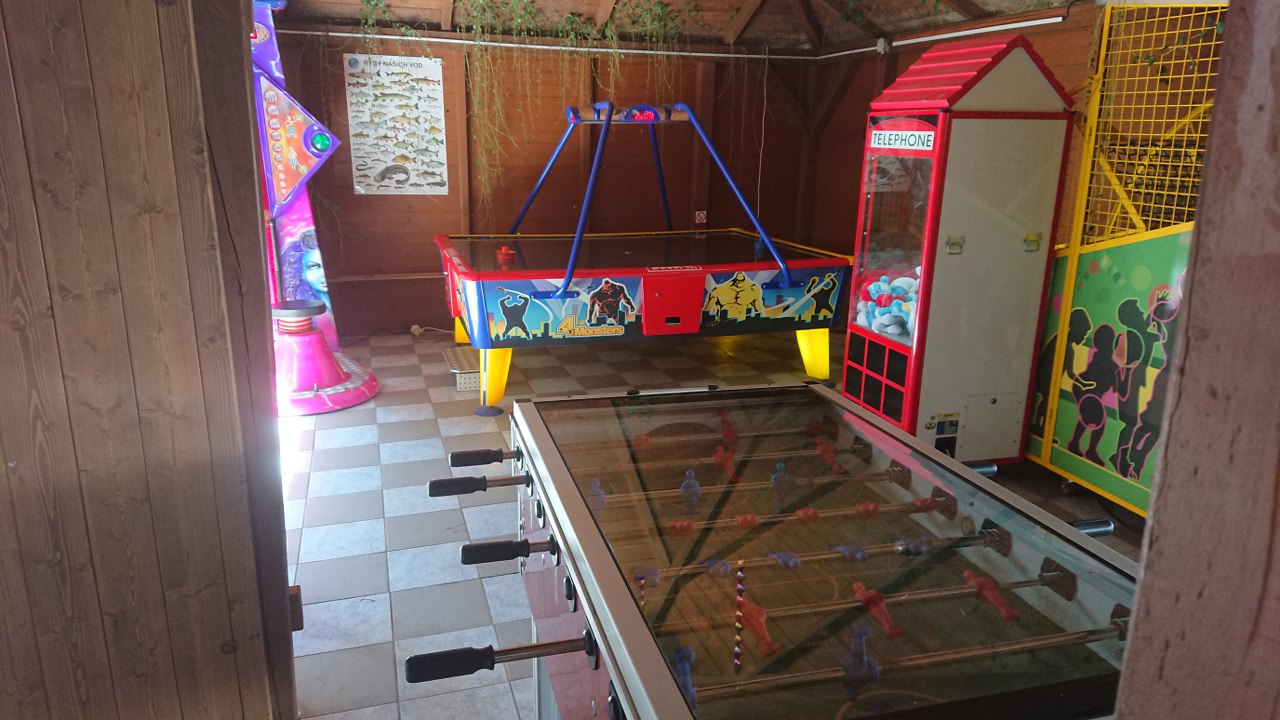 A nice photo from the restaurant terrace right on the dam Hracholusky. Well, who wouldn't like it here. 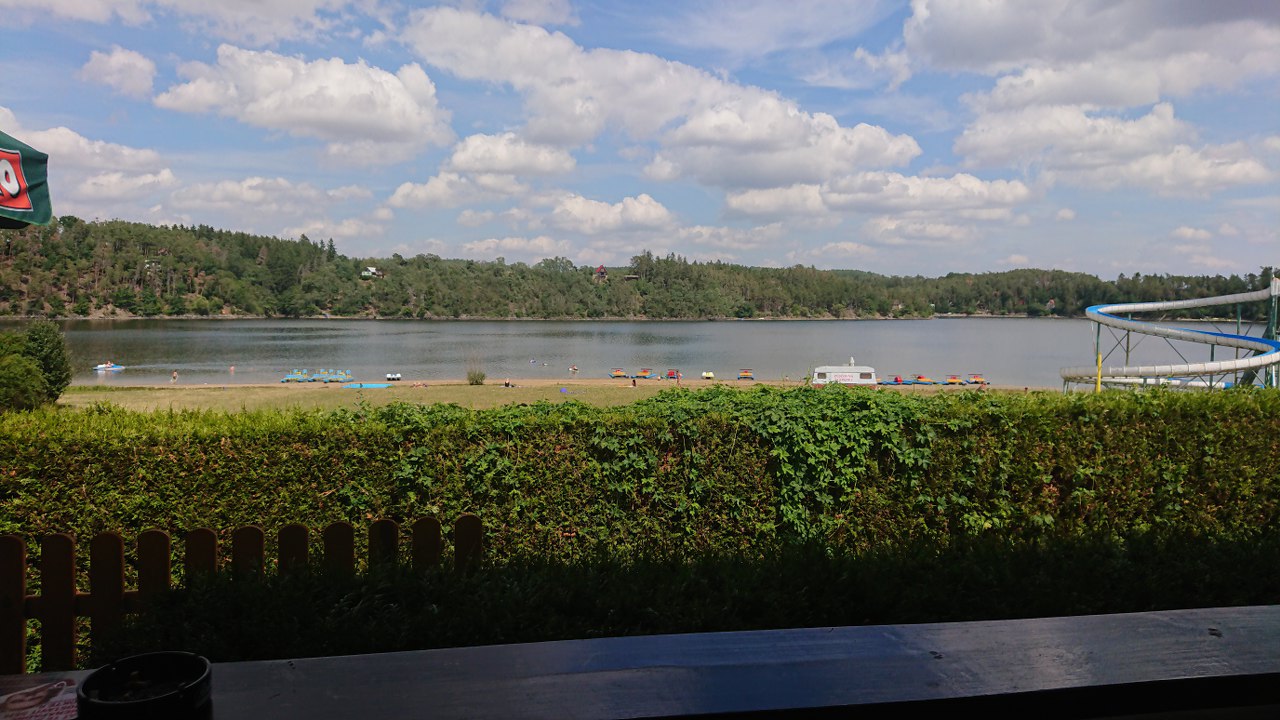 Clean socials and I already know why. Putting the goal directly into the urinal is a good idea and inspiration for other camp operators. I gave at least two goals ... 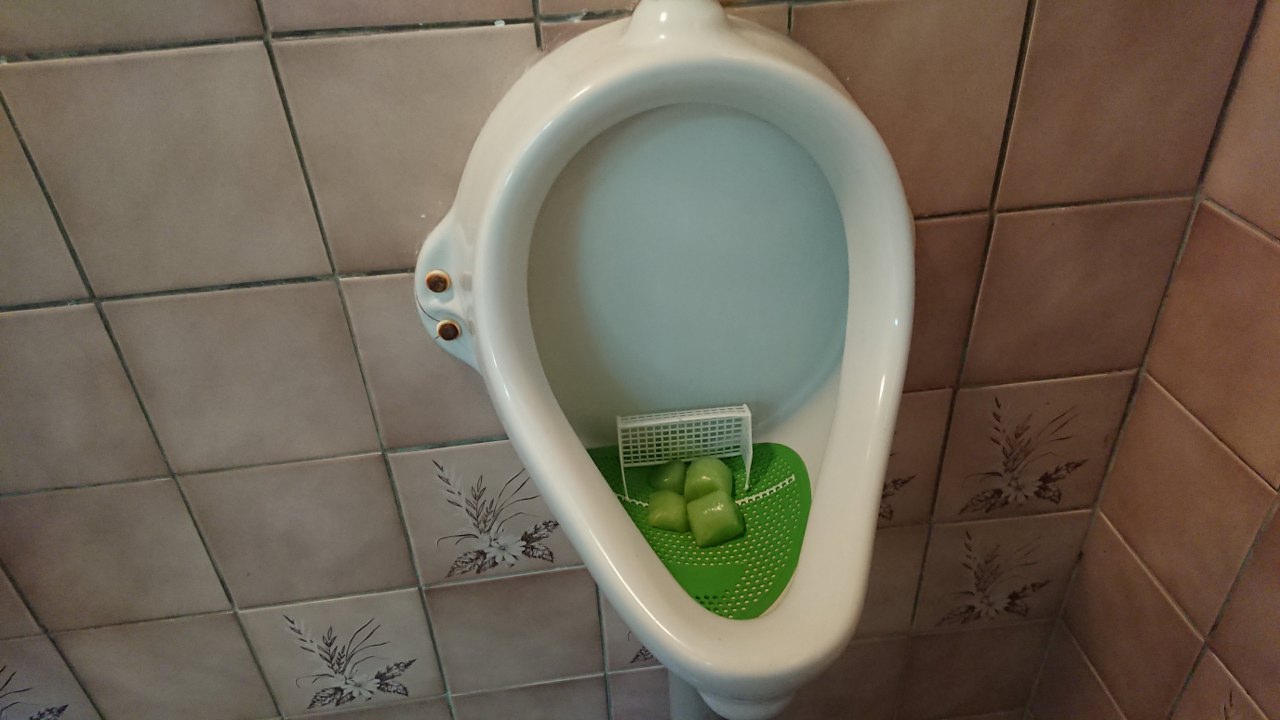 Again, I was taken aback by the water attractions rental. And this is another series of things that are in the camp for free... inflatable attractions for children - free, quad rental - free of charge. In various areas (and not even accommodation) it costs heavy money. Or rent a pedal boat for 150.- CZK. Rent a Padlleboard or kayak for 400.- Kč for the whole day. So I started to wonder if the operator went crazy

. Later I met him on the premises and after a series of inquiries it was clear why he set it that way. As a person who has traveled half the world and has seen many accommodations, he has learned a lot. So setting up services is completely in line not only with European campsites and hotels. Good for us, for guests. 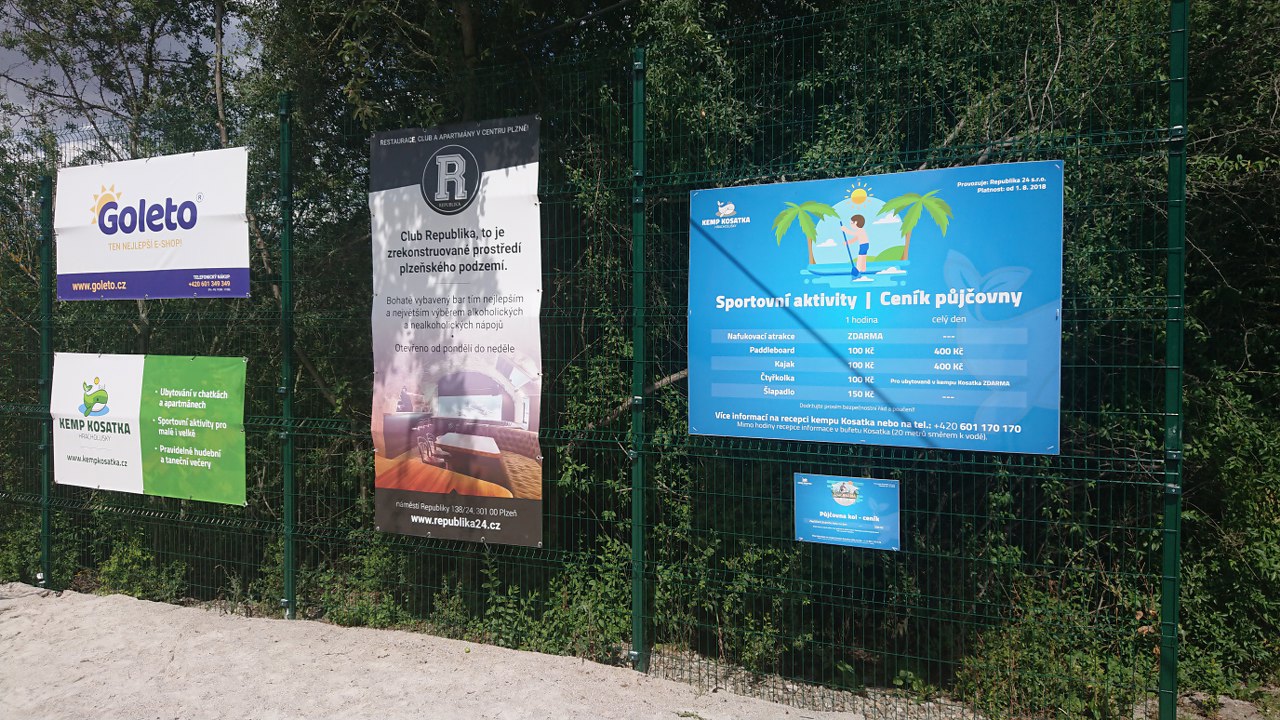 And what about the kids, where do they play?

If Kosatka has already earned your attention, but are afraid of what children will do, it is without fear. A variety of playgrounds and other attractions are available throughout the complex. For days, both 4-12 and older kids have fun. So we go to the list of other attractions from which you will fall on your ass.

The classic playground is not new to campsites. But how many campsites will you see more playgrounds for both the youngest and older children? And it's nicely divided around the area. 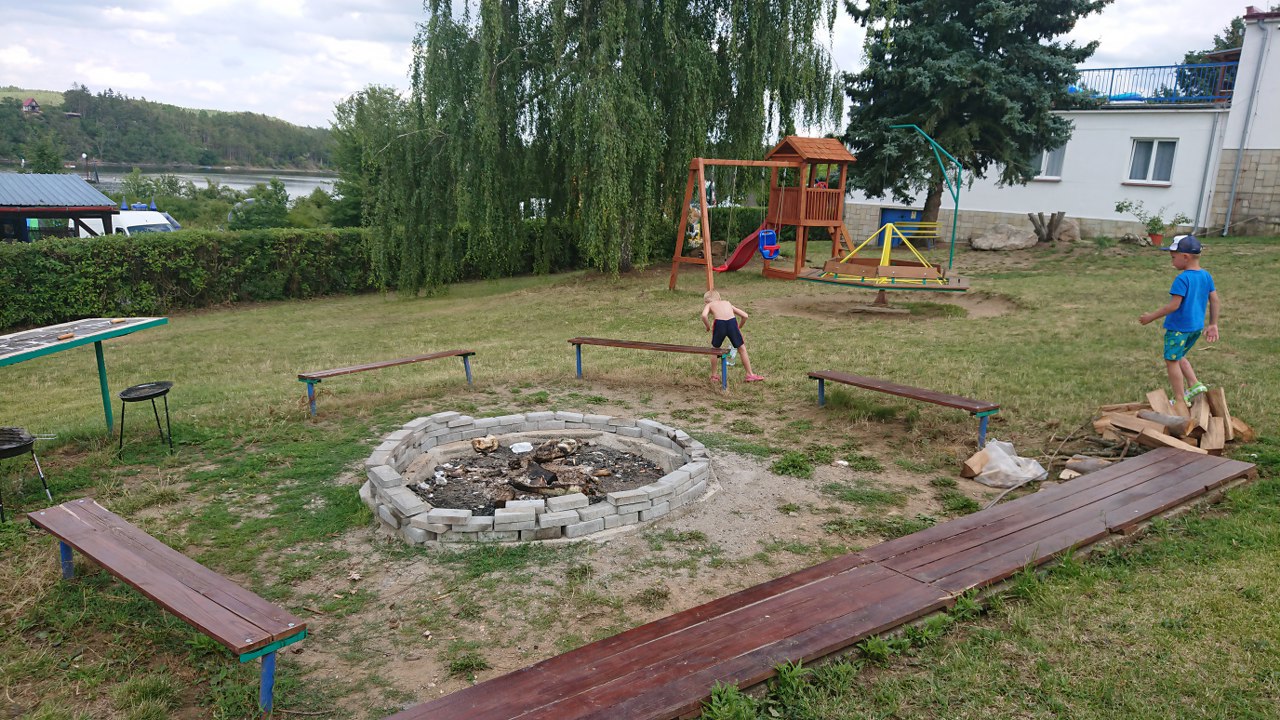 A large slide in the shape of a pirate ship. My 10-year-old daughter would spend at least a few hours here. And we adults opposite the pub ..

. There is no need to say that it is a free attraction for camp and restaurant guests. We all know how much it costs to "use" such an attraction elsewhere. 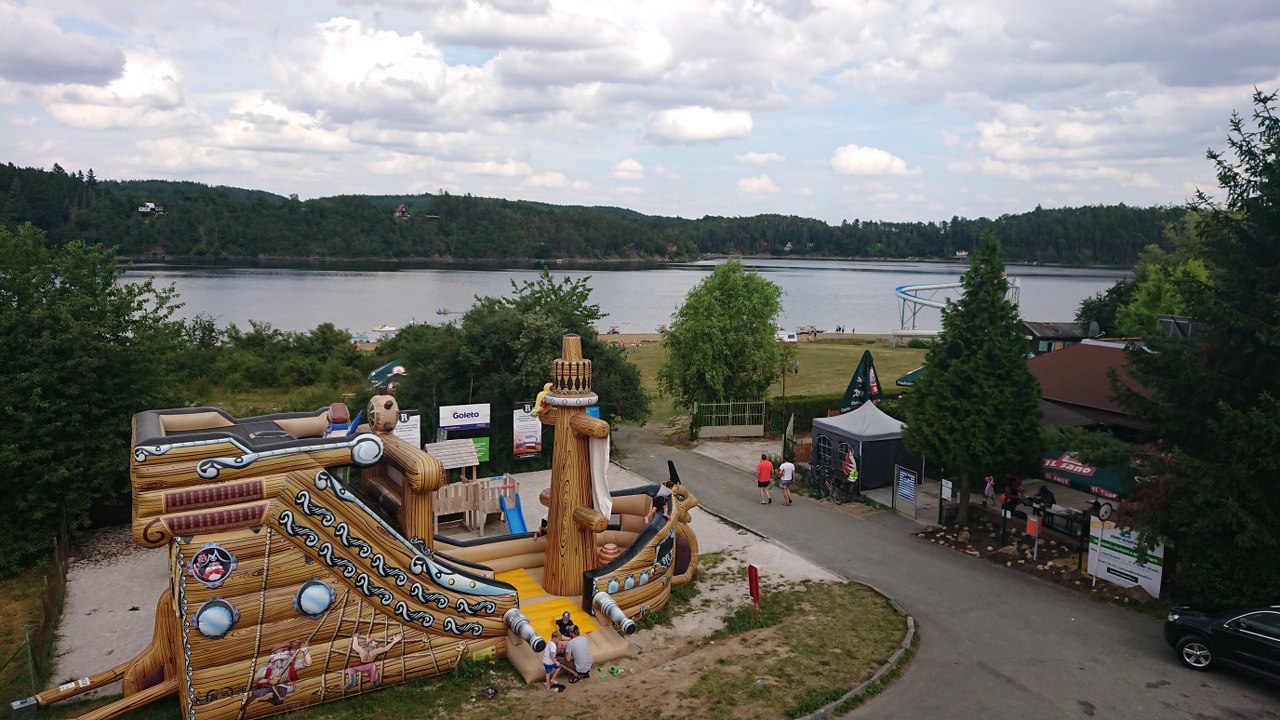 Kicking the ball on the target? I would have fun here too. 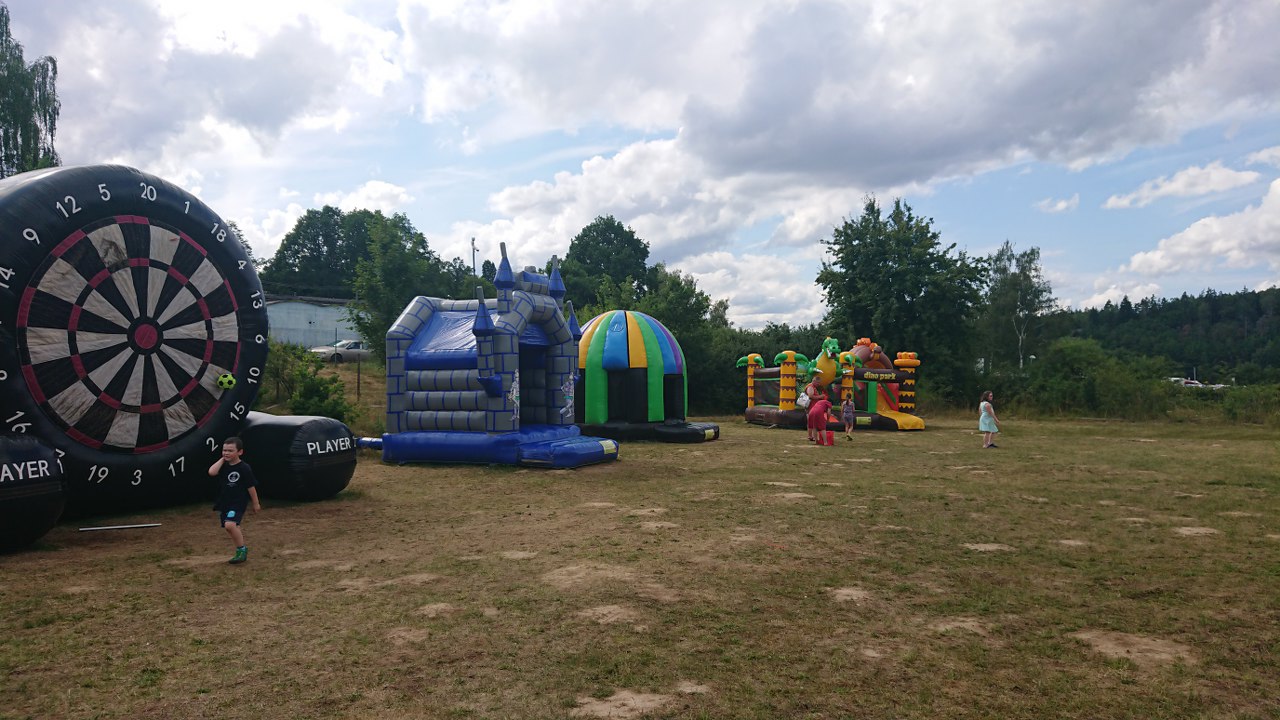 Another inflatable cowboy for camp guests free of charge ... Show photos of these attractions to children. If they don't say they want to go, it will be really weird. 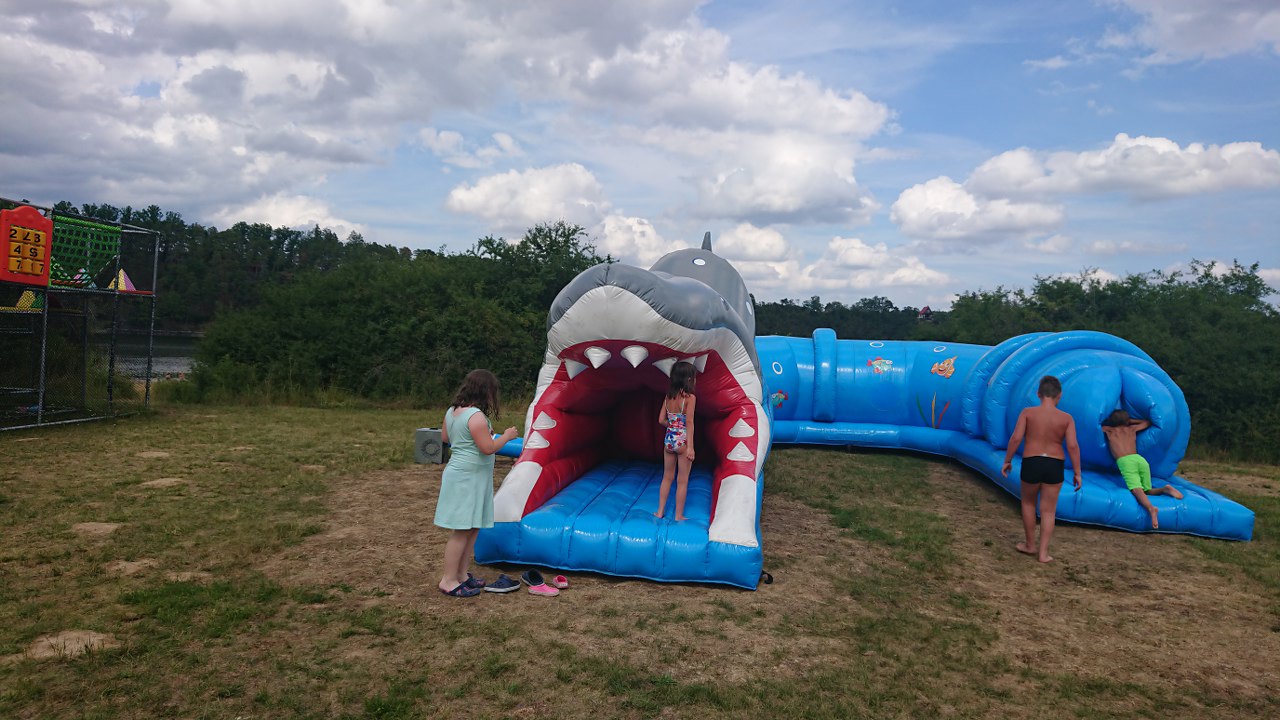 And the cherry in the end. Playroom for children and car racing + cinema for children on rainy days. Also free for camp guests ... How else .. About the children is here royal cared for. This is called a lot of music for little money. 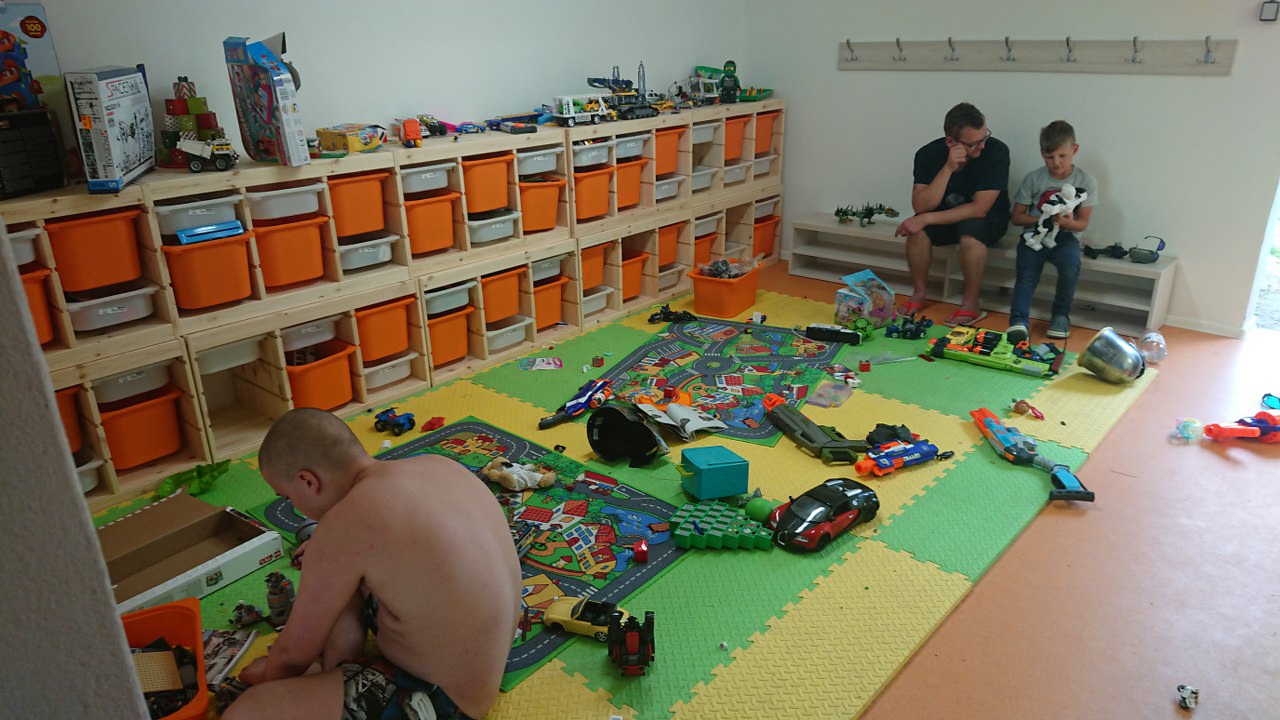 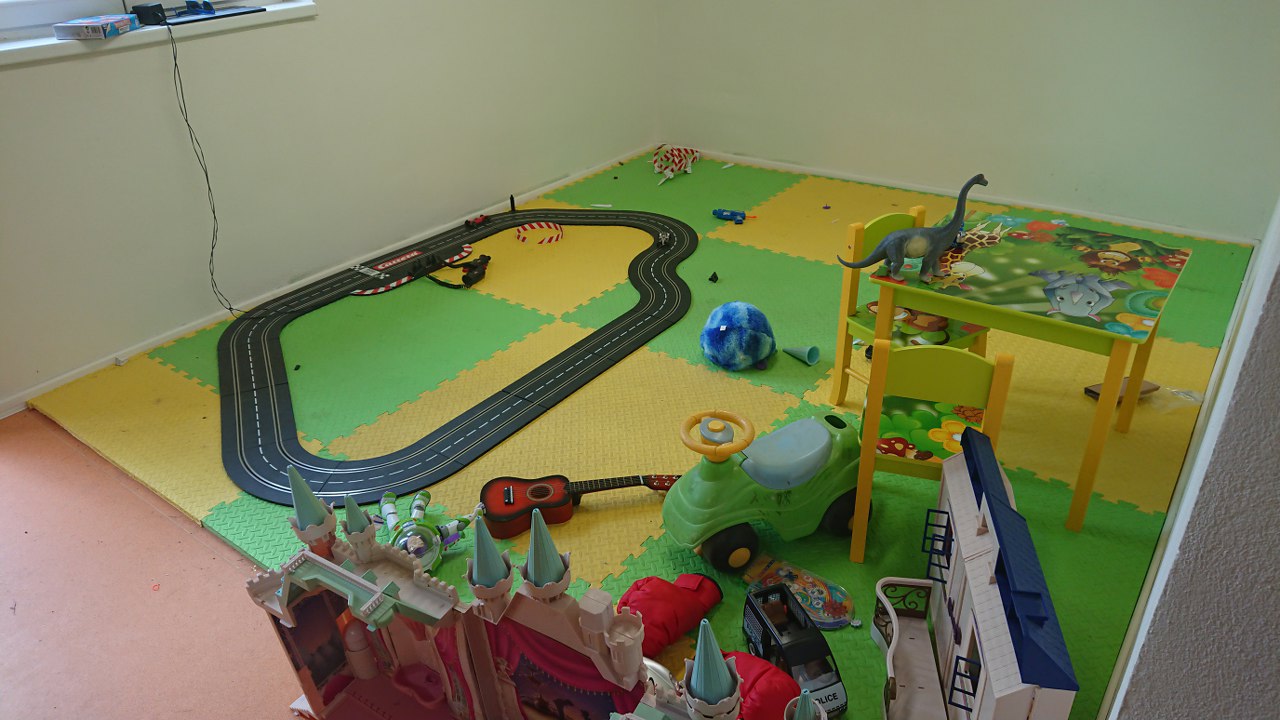 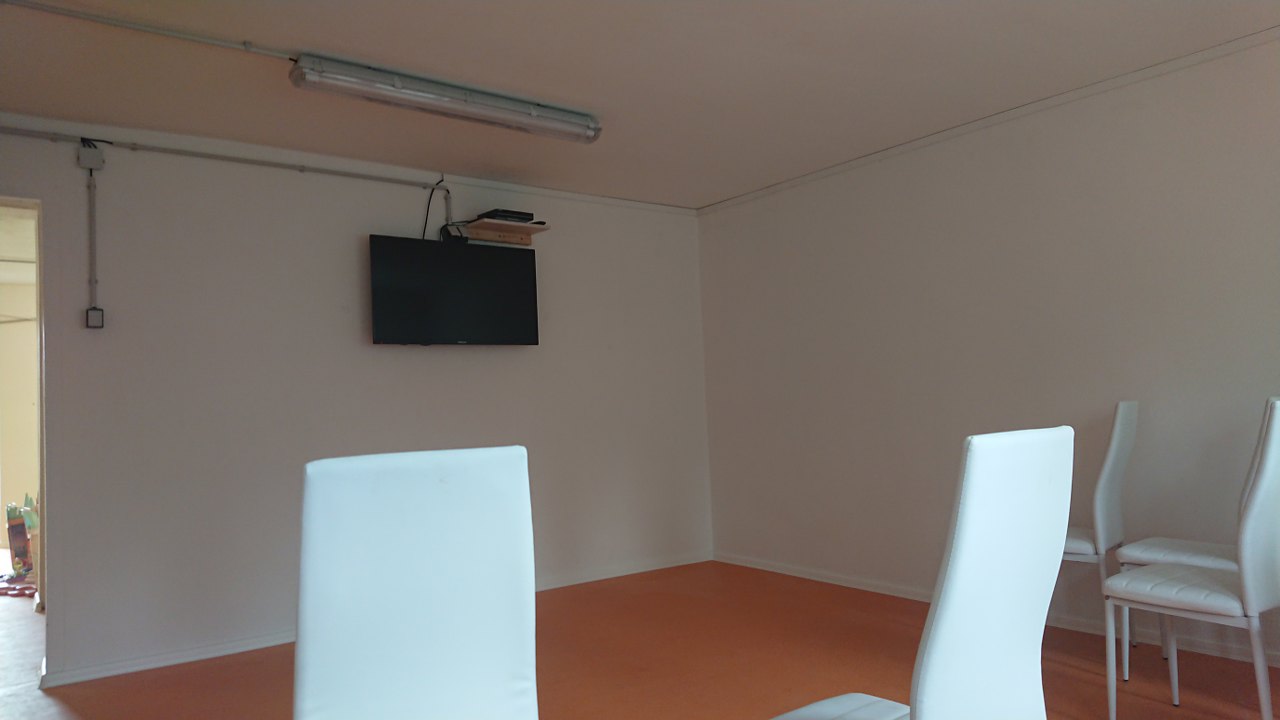 The background of the accommodation in the camp is also far from anything. For more demanding guests, fully equipped apartments and brick cottages are available. Smaller wooden cabins are available for less demanding guests who have come on holiday for activities connected with the Hracholusky dam and only need basic equipment without their own shower. 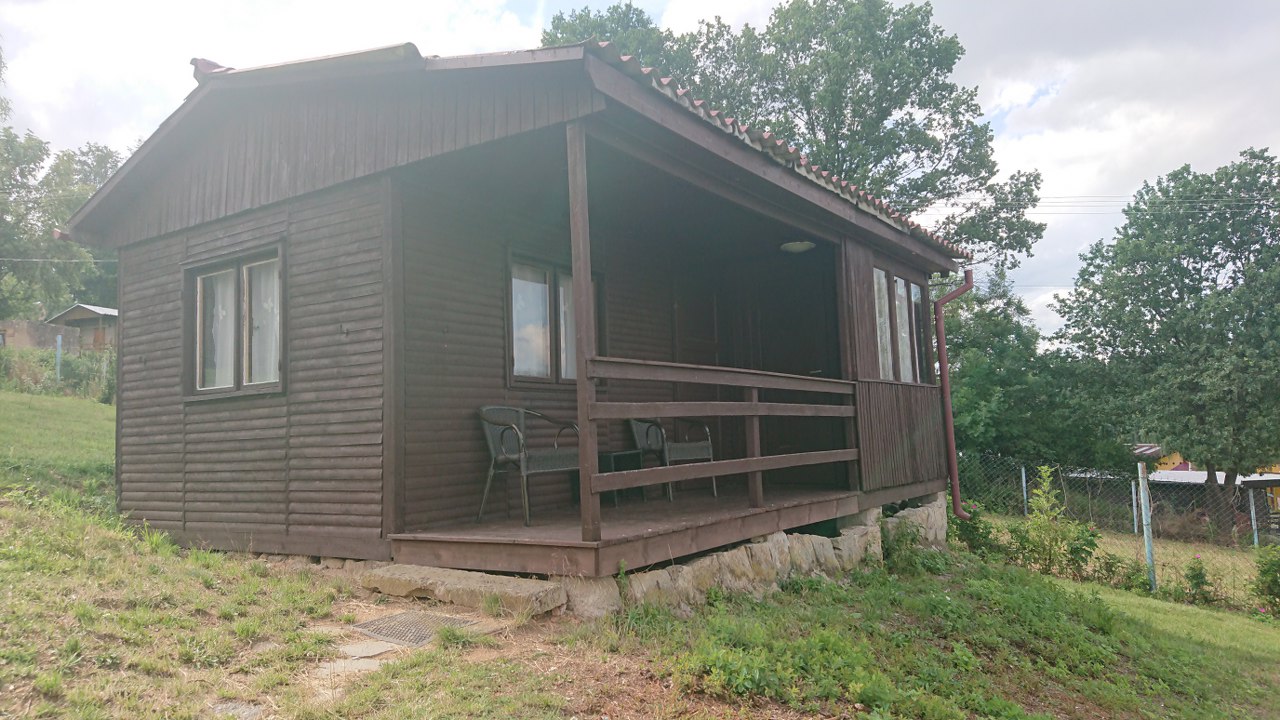 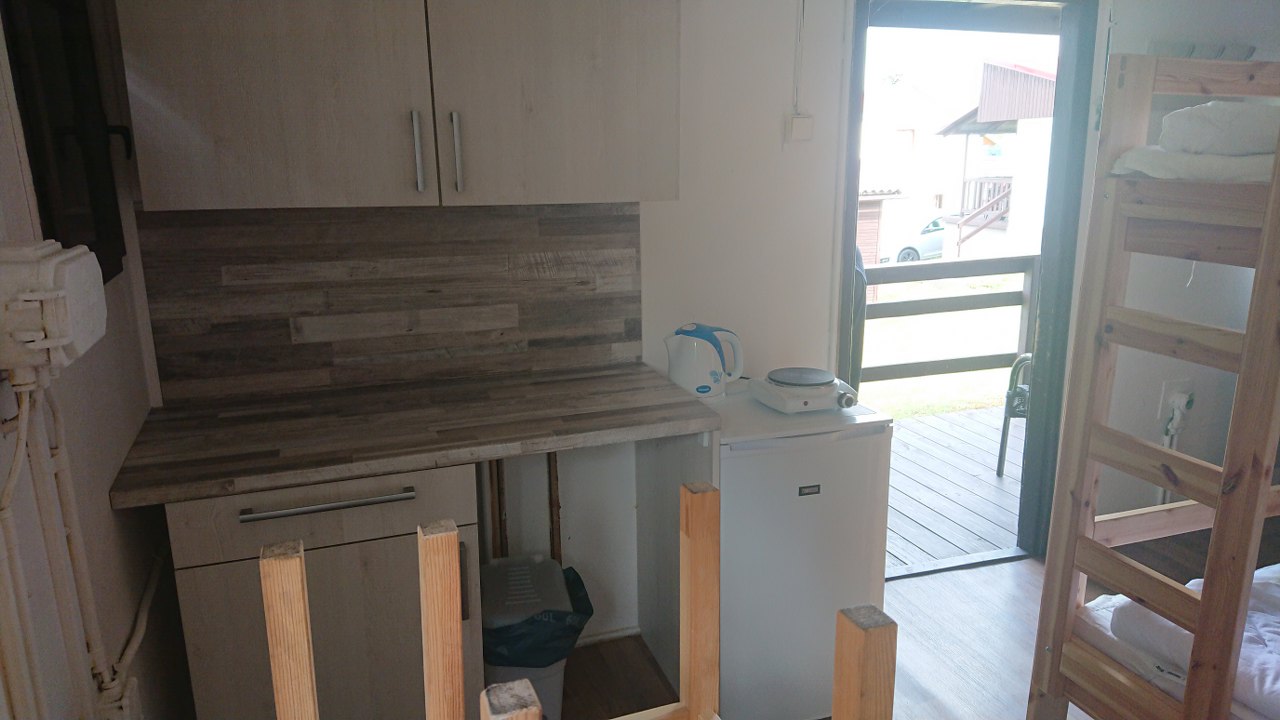 Fully equipped brick cottages with their own toilet and shower are commonplace.

Similarly, each cottage has its own terrace where you can sit out with friends and chat in the evening. 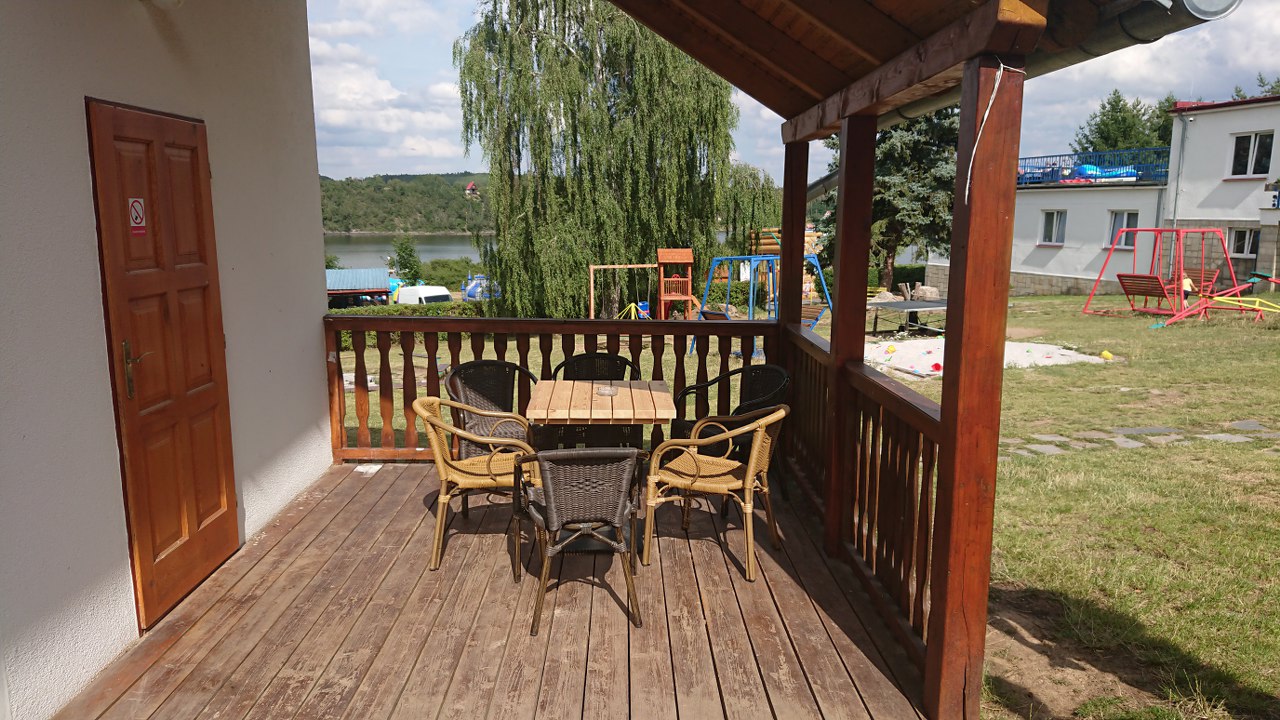 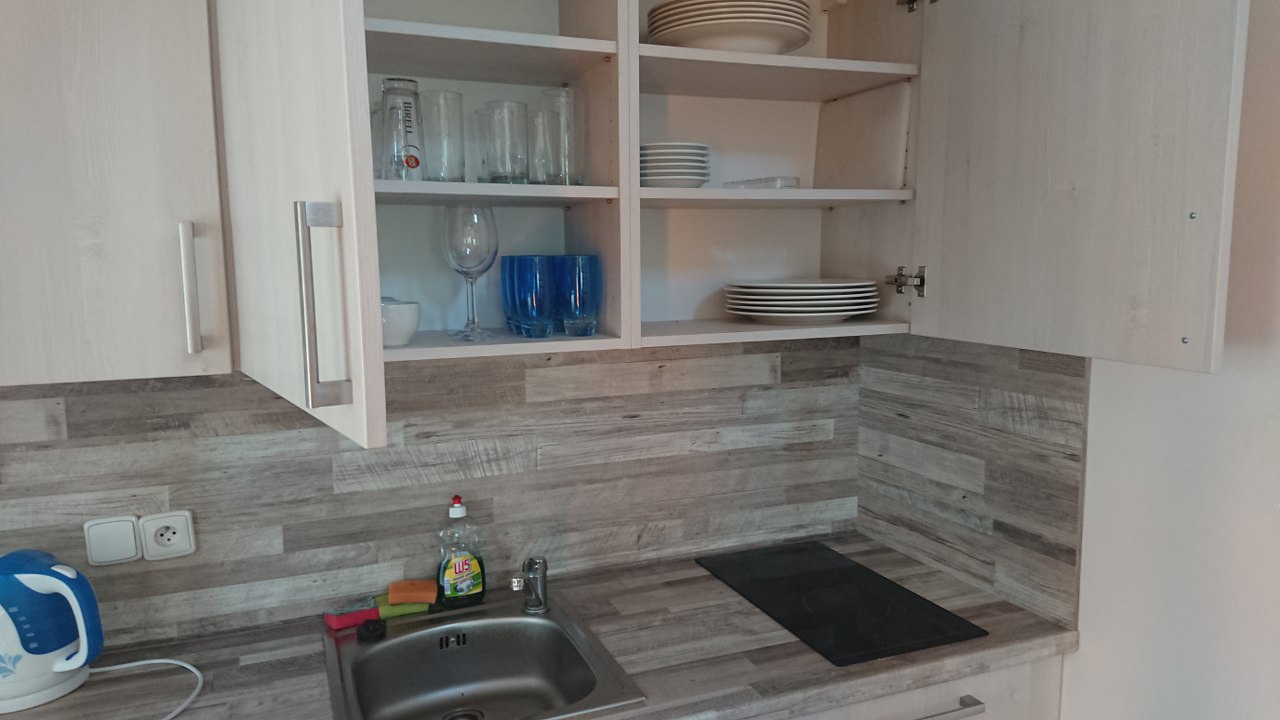 Overall rating of the camp

I consider the camp as a whole very positively and if it will be displayed in the TOP 20 the best rated camps in the Czech Republic in the near future.

So what? Are you interested in camping just like me? In principle, there is nothing to reproach. It is serious to know that the operator of the camp, Mr Moulis, knows what he is doing and has been inspired all over the world to create such a service

. I can tell you that there will be a pool here too. So if you plan to camp by the water this year, visit Kosatka and you will definitely not be disappointed.

Great camp and those attractions are simply cool, I believe that my daughter would have a great time and I would not know about her: -D..Thanks for the tip, we will definitely visit the camp this year. I was surprised how many attractions the camp offers, for comparison we were on the Bolevec pond and there was an inflatable castle 50.- CZK for 10 minutes, but let the child half-day or half-day and do not pay :-D 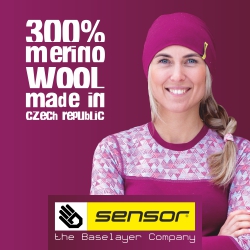